Giuseppe Lorenzi was born in Florence in 1954.

After diploma at the Institute of Art in Florence, he obtained a degree in design at the ISIA of Florence.

In the early eighties together with opening his design studio, ADR in Bologna, he elaborated his etching techniques and in 1985 he held his first personal  exhibition.

At the beginning of the 1990’s he dedicated himself to abstractionism which then evolved into the carving, of small stones. With time the stones chosen began to take on larger shapes and dimensions until assuming the aspect of a large menhir in travertine of  8000 kilos which was carved in 2003 and placed near the famous Saturnia spa’s.

The study and research of archetypal themes tied to primitive cultures and the cosmogonic doctrine which belong to various populations of the world has brought him to develop carvings in a semi figurative way representing those themes.

In 2006 his exhibition in Damascus developed themes associated with the Arab world and its ancient cultures.

In 2007 at the exhibition of the Artists Book, at Pistoia’s new library, he     presented 8 large steles of stone on the theme of The 8 celestial energies from the ancient book of changes (I. CHING).

In the last years some of his artworks have been exposed in same towns of the world. His research continues in synergy with architects and landscapers developing different projects in the design and architectural sector. 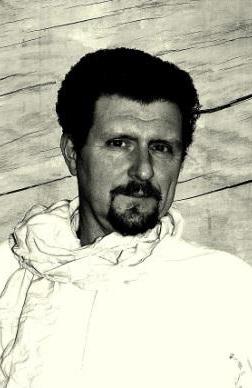